Public policy shapes the lives of citizens in ways that most people never think of. One nation’s policy might grant suffrage to one population, while another country’s policy destroys an entire group of people. The more ethnically diverse a population, the more challenging job its policy-makers have.

Some of the world’s most diverse populations have the lowest gross domestic products (GDP) – Africa is home to the 20 most diverse countries, according to the Washington Post, which creates even more difficulties when resources are scarce.

When policy is absent, or lacks enforcement, countries could see civil unrest where millions of people lose their lives or seek refuge in other countries. An example of this happened in Sudan, where non-Arab and non-Muslim Sudanese fought for independence in the early 2000s.

South Sudan was granted independence from Sudan in 2011, and they signed economic and security agreements in 2012, but as of 2015 had not yet fully adopted those agreements, according to CIA World Factbook. This is where policy-makers’ jobs become frustrating.

Public administrators can follow three basic models for managing multi-ethnic populations: integrationist, differentialist or multicultural. All multi-ethnic nations can use public policy to manage the rights and needs of ethnic groups living there. Professionals who hold a Master of Public Administration and Policy degree are in a position to help impact these laws that affect millions of a country’s citizens and residents.

For some countries, immigration drives a number of public policy initiatives. Nations that have immigrants who wish to enter their borders must consider whether they seek temporary refuge or want to become citizens. Policy-makers are torn in two directions. Do they accommodate immigrants, providing them with support from the country and a path to citizenship? Do they consider these immigrants to be a potential threat to their national way of life, and restrict their movement and freedoms within the country?

Policies usually land somewhere between two extremes. In the United States, millions of people live in the country as undocumented immigrants, many of whom seek citizenship. Yet, citizenship is not a guarantee that immigrants will become full and active citizens, participating in the system of government without fault.

This is a concern shared by the Ethics & Public Policy Center, a political advocacy group. It is also an approach seen in the public policy of Turkey toward Syrian refugees. The refugees are mostly required to live in camps and do not have the rights enjoyed by refugees in other countries.

When a country’s government wishes to integrate its immigrants into citizens, it means that policy-makers create laws that are designed to represent the whole. On the extreme, integration, also called “assimilation,” denotes an expectation that ethnic groups will abandon their languages, religions, and cultural differences. However, because countries like the U.S. cannot realistically enforce such an approach, American public policy must make accommodation for people who do not speak the language. For example, millions of Latinos can benefit from U.S. legislation called the Affordable Care Act, but many of them could only take advantage of the program when Spanish-language services are offered.

Differentialism is the other extreme for policy-making in multi-ethnic countries. This policy model describes the practice of separating groups based on cultural differences and expecting that they will live more or less separate lives. Classic examples of differentialist societies include India’s caste system, the system of segregation in South Africa called Apartheid, and the segregation in the U.S. in the first half of the 20th Century.

Although this model also seems to draw straight lines down the path of public policy, there is certainly a lot of room for debate. Differentialism in public policy often drives conflict between rival groups. The conflict between Israel and Palestine, with Israeli public policy deciding not to grant full participation rights to Palestinians living in Israel, shows that concerns about marginalized populations can draw the political interest and ire of other countries.

For a few countries, multiculturalism is the only way to protect the rights of all ethnic groups living in the region. The multicultural model of policy-making describes the broad acceptance of all natural cultures in the country, without bias. The government of Canada identifies itself as one of the best examples of a multicultural country, in that it makes no effort to present a unified representation of the typical citizen. In Canada, all citizens are considered equal regardless of ethnicity.

While this ideal is common to many countries without multicultural policy models, there are a few distinctions that set countries like Canada apart. The most obvious is the lack of a single national language. Canada has two official languages, English and French, which must be present in all government documentation, while citizens are not expected to be fluent in both. In a multicultural country, public policy-makers and analysts work to ensure that all nationalities are accorded equity, and that minority indigenous populations receive support as well.

These multi-cultural models are a few examples of the complex and exciting world of policy-makers and public administrators. If you are interested in learning more about careers in public policy, explore it further by learning more about the MPAP online degree from American University. 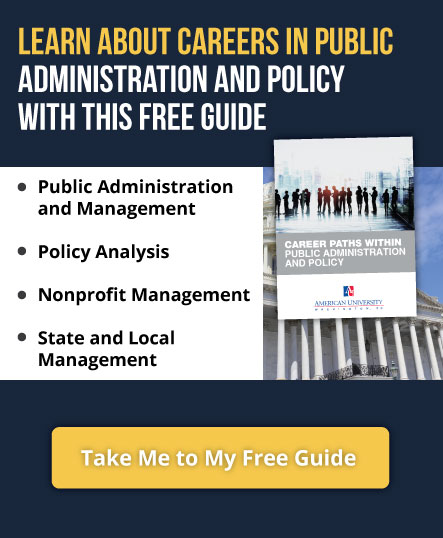 To learn more about how American University’s online Master of Public Administration and Policy can advance your career, request more information or call us toll free at 855-725-7614.