International trade has taken quite a beating in the United States during this election cycle, with few candidates offering a positive view of U.S. trade policies such as the Trans-Pacific Partnership (TPP) Agreement which is currently awaiting Congressional approval. Most notably, Donald Trump has proposed imposing tariffs upwards of 45 percent on imports from China in order to punish that country for alleged currency manipulation despite the fact that the International Monetary Fund has found that the Chinese yuan has been fairly valued since last year. Bernie Sanders has stated that the United States should not have passed the North American Free Trade Agreement (NAFTA), and should not pass the TPP.

These positions are in stark contrast to policy recommendations of the majority of economists. Consider the results of a 2012 University of Chicago Booth School of Business survey of economists (the IGM Forum): 96 percent of economists agree or strongly agree with the statement “Freer trade improves productive efficiency and offers consumers better choices, and in the long run these gains are much larger than any effects on employment.” Similarly, ninety-eight percent of economists agree or strongly agree that US citizens are better off under NAFTA than they would have been without the 1995 agreement.1 One hundred percent of economists agree or strongly agree that US consumers are better off because they can buy products made more cheaply in China. Economic theory unequivocally shows that countries are better off when they liberalize trade; free trade allows countries to import products from those that are able to produce the products more efficiently, thus lowering consumer prices and increasing total welfare.

That is not to say that free trade comes without a cost. In the same survey of economists cited above, 96 percent of economists agreed or strongly agreed that “some Americans who work in the production of competing goods…are made worse off by trade with China.” Economic trade theory has long suggested that when countries like the United States, which is relatively abundant in skilled labor when compared to many of their trading partners, liberalize trade, the wages of skilled workers will increase while the wages of unskilled workers will fall. The U.S. “skill gap,” or the difference in wages of skilled workers when compared to unskilled workers, has increased significantly over the past 40 years as illustrated in Figure 1.

However, for many years trade economists minimized the role that trade played in this growing inequality when compared to other potential causes such as skill-biased technical change. Estimates in academic papers published throughout the 1990s attributed anywhere from 1.4 to 7 percentage points of the skill gap to imports.2 Estimates using more recent data suggest that the role of imports may be much greater. A recent report by Josh Bivens of the Economic Policy Institute found that trade can explain as much as one-third of the growth in this skill gap since 1979.3 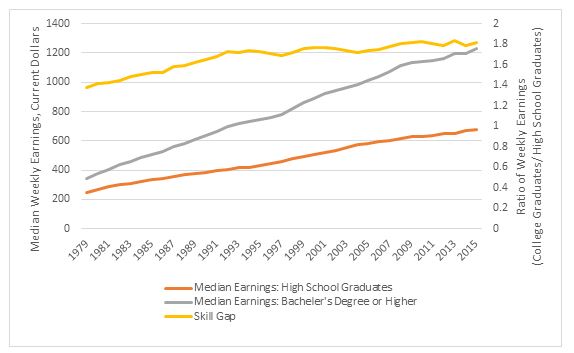 And though economic models rarely include the possibility that trade can result in unemployment, recent empirical studies have found that the unemployment effects associated with increased import competition can be significant. A 2016 study by Acemoglu et al. found that increased imports from China between 1999 and 2011 resulted in a net loss of 985,000 manufacturing jobs (out of a total decline in US manufacturing employment of 5.8 million workers).4

Given these results, should we abandon efforts to further liberalize trade with agreements such as the TPP? Most trade economists would argue that if those who are hurt from trade liberalization can be compensated for their losses, it is possible to make everyone better off under free trade. Unfortunately, the only tool that the United States has implemented to compensate workers, the Trade Adjustment Assistance (TAA) program, has largely proved inadequate. The TAA program is designed to provide extended unemployment benefits to workers who have lost their jobs due to increased imports; the program includes training and other job search assistance to help workers find new workers at similar levels of pay, but not all workers take advantage of these options.

My own research found no statistical evidence that workers who participated in the TAA program experienced better employment outcomes than those not in the program.5 That being said, workers who took advantage of the training component of the TAA program were 10 to 12 percentage points more likely to find a job, and at higher pay levels, than those TAA participants who did not participate in the training component of the program. Surely we can design a better program to help displaced workers, thus allowing for everyone to benefit from increased globalization. Rather than trying to turn back time to the days when countries were protected by high tariff walls, perhaps policy makers should consider what types of interventions can help not only displaced workers, but also make US firms more competitive on world markets.

About the Author
Kara Reynolds’ research interests include the political economy of trade protection, particularly antidumping protection, and the impact of trade liberalization on workers and firms. She teaches ECON-600 Microeconomic Theory.