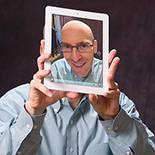 Scott Talan, MPA, is a full-time professor of Public & Strategic Communication. Scott is an expert in social media and personal branding honed through communications experience in four distinct fields: TV News, Politics, Non-profits/NGO's and Higher Education. Scott has worked at the United Nations, Harvard University and the March of Dimes.

Scott wrote at ABC News Good Morning America. He's also reported on-air for local TV news stations in several states including California, New Mexico, and Florida while covering politics including the 2000 presidential recount story where he bested other reporters for stories and interviews.

Before news, Scott was as an elected city council member and Mayor of Lafayette, California.

Prior to joining American University Scott was an adjunct faculty member at George Washington and Johns Hopkins. In the summer of 2012 Scott also taught media courses in China at Xiamen University and lectured at Renmin University. He has also guest lectured at Japan's Ritsumeikan University.

Professor Scott Talan serves as a Faculty in Residence living on campus at American University, extending the teaching and learning outside the classroom. He also advised the student run Social Media Club. In 2013 Scott conducted research on the nature of student awareness of current employer recruiting practices and gave a TED-x talk based on this project. He has given the 'Last Lecture' as well on the topic of personal branding. Additionally he has spoken many times at academic conferences on social media best practices in a classroom setting as well as use of other technology and teaching tools.

Scott received his Master in Public Administration from Harvard's Kennedy School of Government, studied broadcast journalism at Stanford, and completed his BA at the University of California at Davis in Political Science and Economics.

Professor Scott Talan teaches COMM 552, Social Media Strategies and Tactics. Get to know Scott and learn more about his experience and teaching style.